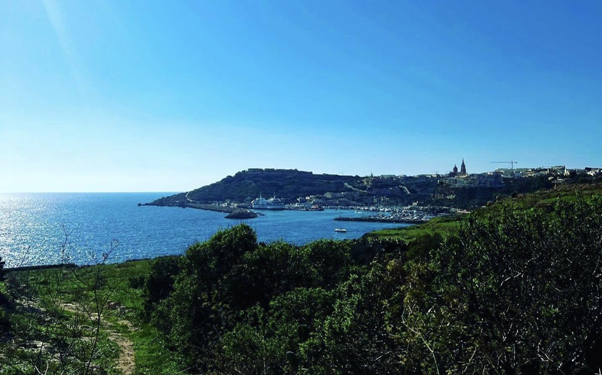 Malta is an archipelago in the middle of the Mediterranean Sea. As a result, it has a Mediterranean climate, which means summers are long, with dry and hot months, almost without wind. Winters are mild and usually wet. In December and January, winds can be strong and streets can turn into wild rivers because when it rains, it rains hard and a lot. You may well see a car float by after a heavy rain or a spontaneous waterfall on the Maltese steps of the Maltese villages located on the hills.

There often seems to be no end to summer in Malta. From May to October, the average temperature is 30 degrees. In July and August, the temperature sometimes shoots up to 40 degrees, especially when the wind comes from the south (Sirocco). These are the famous Maltese heat waves, when it is too hot, even in the shade. Unfortunately, the wind does not help either, as a Sirocco wind is a hot wind that feels like a hairdryer, so it does not cool you down. Sunshine hours in Malta are long, up to 300,000 a year. Even in autumn (November), Malta still has 161 hours of sunshine. That’s more than twice as many as in other countries in Europe.

You can swim in the seas around Malta six months a year (with good sea temperatures). Malta’s crystal-clear lagoons are a joy to swim in. You’ll find the lagoons almost everywhere, but the largest lagoon is next to Comino, also known as: the Blue Lagoon. This lagoon is quite shallow, so you can swim there early in the season. Keep in mind that the lagoon is packed in July and August.

What should you bring to Malta in summer?

In Malta (but basically anytime you go out in the sun) you need good sun protection. A hat is a must, where we recommend: the bigger, the better. A cap is not enough, the shade of the hat should also fall on the shoulders. Flip-flops are handy, but the Maltese islands (especially near the lagoons) are rocky, and those rock edges can be sharp, so trainers are also handy to bring. Of course, you can’t arrive at the islands without your beachwear.

If you don’t fancy crowds and extraordinary high temperatures, it’s best to come in spring or autumn. Be aware that this season is not guaranteed to be sunny all the time. It can be pouring at times, but temperatures are pleasant and there is no mass tourism. There is more wind in Malta in autumn than in spring. Bring at least a windproof jacket and closed shoes (in addition to open shoes). The coldest months are definitely the dark winter months. Storms develop in late November and evenings can be cold (around 10 degrees). It rains in winter, but these are showers with long dry periods in between. On average, it is 15 degrees during the day. December and January are the coldest months and, although infrequent, the islands have occasionally seen light snow.

Swimming is not recommended during these months. The water temperature is too cold then, and the turbulent weather (alternating with sunny days) makes the Mediterranean Sea current too strong in winter. You can, however, enjoy the beach during those days and watch the kite surfers interact with the waves.

Are you interested in coming to Malta, we can pick you up from the airport, check this site: www.suprememalta.com